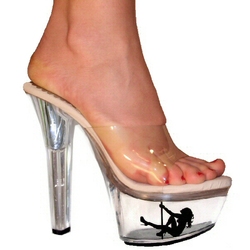 Another clear sign that Daddy missed one too many of your birthday parties, or maybe you just attend TCU.Human sexuality is an complex beast, its expression influenced by an intricate tangle of psychology, biology, emotion and social norms, all tempered by personal experience. Sexual behavior is certainly much too complicated to be boiled down to a single factor. Unless you're a college-age girl whose father wasn't around when you were growing up. Then, you're basically a slut.

So says TCU psychology professor Danielle DelPriore, whose report on the influence dad has on his offspring's love life got a lot of attention this week. And why wouldn't it?

The study was simple enough. Researchers, led by DelPriore, enlisted 64 straight female TCU undergraduates. Researchers told half of the subjects that they were evaluating their writing style and instructed them to think of an important life event Dad wasn't around for and "describe in detail how your father's lack of support -- or his physical or psychological absence -- made you feel." The other half were asked to muse on the same subject, only for events when their fathers were actually there.

Some women from both groups were asked to fill in the blanks in incomplete sequences of letters (e.g., S_X, _AK_D) to make words. The rest were given a list of statements about sexual permissiveness (e.g., "Sex without love is OK"; "For me, sex with someone does not necessarily imply that I am committed to that person"; "I dislike using condoms due to reduced sexual pleasure") and asked, on a scale of 1 to 9, how strongly they agreed. Those girls primed to think about their father's absence were more likely to add an "E" to "S_X" and to tend toward the 9-end on the sexual permissiveness questions.

Previous studies, like this one from the National Institutes of Health, reached a similar conclusion, but they've typically done so in a much more rigorous way. Slate and Jezebel in particular take issue with the methodology of the TCU study.

For starters, the study participants are young, relatively affluent and mostly white, hardly a representative slice of America. Beyond that, the conclusions you can draw from a college student seeing "S_X" and thinking "SEX" are basically nil. There's certainly not enough to proclaim, as the researchers do, that the "results provide the first true experimental evidence supporting a causal relationship between paternal disengagement and changes in women's psychology that promote risky sexual behavior."

This is enough of a stretch to make Stretch Armstrong look like he needs to loosen up. In fact, the idea that this study suggests anything at all about the effect of absent fathers on women's sexual behavior is so ludicrous that it's hard to believe the Journal of Personality and Social Psychology accepted it for publication. I am not disputing the notion that fathers' presence or absence may affect girls' sexual development: Previous research has indeed suggested that this is the case. Nor am I contesting the idea that a woman's relationship with her father has some impact on her later romantic and sexual choices -- the thriving state of the psychotherapy industry is the equivalent of a big fat "no duh" on this point. But this study does not demonstrate either of those conclusions. This study merely demonstrates that female TCU students would rather not think about loving Daddy and having sex at the same time.

And Jezebel's Callie Buesman thinks the researchers' conclusion is, well, kind of paternalistic:

To attempt to prove that a woman who is comfortable having and/or thinking about casual sex is the byproduct of paternal neglect is to imply that a woman in possession of a sex drive is a bad thing. In the end, the way in which this study was framed says far more about the researchers than the test subjects.