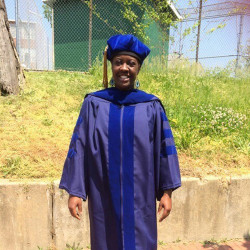 Lateffa King has come a long way since graduating from Pulaski County High School in 1992.

Nearly 25 years after graduating from PCHS, King earned her Ph.D. in clinical psychology from Howard University in Washington D.C. earlier this month. She currently lives just outside D.C. in Alexandria.

Howard graduated as PCHS’ senior class president, and later went to the University of Virginia in the Echols Scholars Program under the University Achievement Awards. According to King, she didn’t have to declare a major through that program.

“What was interesting was one of the benefits of being in the program is that we were unrestricted in the courses we would select,” King says. “They would give priority to seniors, and then the next priority was given to Echols Scholars, so I was able to take whatever interested me.”

As it turned out, her class load leaned toward an interest in psychology, despite the fact that she went to UVA intending to study pre-med. She declared a double major in psychology and African American studies on her academic advisor’s recommendation, and then earned her bachelor’s degree in 1996.

King described herself as a “super science nerd,” but says that along the way, she found that she was more interested in psychology. That led her to Howard University, where she earned her master’s in social work in 1998.

Although she planned to become a therapist while still at UVA, one of her psychology professors suggested going for a social work degree, as it could be an alternate path to a career in clinical psychology.

Since then, she has worked a variety of jobs. King eventually did work as a therapist in Alexandria, and said that the longest job she had before going back for her Ph.D. was working as a counselor in the early childhood center at Peabody Elementary School in Washington D.C.’s Capitol Hill cluster.

King decided to go back to school to earn her doctorate in 2004, in which she returned to Howard University as a Frederick Douglas Fellow. According to King, the clinical psychology program at Howard University lasts five years, although for her, it ended up being longer as, inevitably, life got in the way when she and her husband separated.

Fortunately, with a master’s degree under her belt, King says working during her time off school was no problem.

“I thought about not finishing, because I’ve always been employable without the Ph.D.,” King admits.

When she took a break from the program in 2008, King says she was about to start her dissertation. She returned to school in 2011, and did her required internship at the Children’s Hospital in Los Angeles.

Currently, King works as a national trainer for publishing company Houghton Mifflin Harcourt. This past semester, she also worked at Howard University as an adjunct professor teaching abnormal psychology to undergraduates.

During the six-year period where she wasn’t taking classes, King says that was when she gained perspective on the career path she chose.

“What I took away from it is, do what you love to do,” King advocates. “Find something that you love to do, or what you’re good at. Most people love what they’re good at. While I have been working, and even now, being an adjunct professor is about the most traditional thing I’ve done in the past five or 10 years.”

She reflects on the fact that her career path has differed from that of her colleagues with whom she studied in her psychology program, who were set on becoming therapists or going down the academic route. According to King, the nontraditional path has always been the one for her.

“I don’t really wanna be tenure track, I know that’s not what I wanna do,” King explains. “I like the flexibility of doing my own thing. I love to talk, and love the energy of groups of people, so that has made a niche for me. So as a psychologist, being a trainer and presenting to large groups, it is a niche for me.”

For others who plan to go down a similar nontraditional path for their passions in life, King suggests paying attention to the unique talents people point out, and to not be afraid to lean in that direction. She adds that those who plan to go to college should do something that makes sense for what they want to do.

King credits her mother, Roberta Carter, with encouraging her to pursue the nontraditional path. She recalls having a different ambition for what she wanted to be when she grew up just about every week, although her mother always had the same response.

“No matter how crazy it was, she would say: ‘You can be whatever you want to be, honey’,” King recalls. “Every time, I remember that.

“I never thought I couldn’t do what I wanted to do,” she adds.

Although King is in a drastically different environment from Pulaski County, she says that coming from a small town atmosphere has been crucial in helping her navigate life in the hustle and bustle of the big city atmosphere.

“Think big,” King says, hypothetically offering her advice. “We’re from a small town in Virginia, and I didn’t value so much coming from Pulaski when I left. But as I’ve grown older, I’ve realized the importance of family, values of God, treating people right, being part of a community. Just know that there’s a great big world out there, and there are people who need folks who come from a place where being part of a community is needed in other places.”