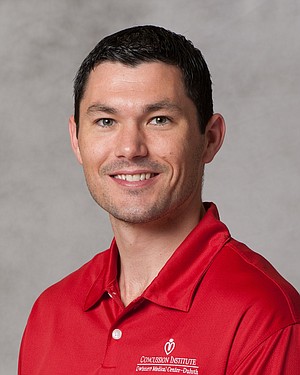 The Gwinnett Medical Center in Duluth now offers an extra edge for area athletes off the field.

Dr. Adam Shunk and GMC recently launched a sports psychology program. Shunk, who also works as a neuropsychologist in GMC’s Concussion Institute, will work with athletes ranging from high school to the professional ranks.

Other issues that Shunk could help treat athletes for is depression after a season or career-ending injury, or perhaps it’s just dealing with the pressures of being a high-level recruit.

As a former professional athlete himself, Shunk is equipped to understand the pressures that modern athletes are under. At North Carolina he was the 2003 Indoor high jump national champion.

He went to compete professionally for Nike while getting his masters’ and doctorate in psychology at Ball State.

During his first season as a professional he learned first-hand the value that sports psychology could have. Prior to the U.S. Track and Field Championships his agent approached him and told him that if he achieved a certain feat during the competition that he would be signed by Nike right then and there.

“It was the most pressure I’ve ever felt,” Shunk said. “I was focused. I was ready to perform. Then it went to internal motivation to know I’m thinking about money, the contract and doing it for the sponsorship to where I choked. I actually had my lowest performance of my entire career at the USA Championships. It’s kind of my rock bottom. It ended up working out well. Three weeks later I still signed a contract, but I just realized the importance of just the mental side of sport and how important it was for me to develop some skills to manage the pressure.”

He began to study the impact of that psychology could have on athlete performance. Originally it was for his own gain, but he ultimately found pathway for himself after his competition days were over.

“I wanted to study this for my own selfish reasons to use in my own career, but in doing so I realized that this something I’d really enjoy doing,” Shunk said. “I added that skill-set along the way. I took all the necessary courses and then met a sports psychologist upon graduation who took me under his wing on a two-year fellowship underneath him training.”

After his fellowship at St. Vincent in the Neuroscience Institute he joined the St. Vincent Sport Performance Center to work in neuropsychology and sports psychology.

He worked with professional athletes and consulted with Purdue University as well. Eventually he hopes to be able to operate on a similar scale at GMC.

“I’m going to try to create a model like we had in Indianapolis where I was actually consulting with Purdue University two days a week, I was working with professional athletes in the area and really to just create a resource that developmental athletes, recreational athletes all the way up to your professional and Olympic athletes have,” Shunk said. “A resource where if they’re wanting to work on mental training skills or just attain a sports psychology consultation that it’s available in this community.”