"'Tis the season to be jolly," which inevitably means many of us will overeat and overspend. But new research suggests these actions are natural at this time of year, as we adopt the "ostrich problem." We intentionally fail to keep track of our eating and spending, and bury our heads in the sand.

Psychologists from the University of Sheffield in the UK, led by Dr. Thomas Webb of the Department of Psychology, are in the midst of a project analyzing how monitoring progress can affect the ability to achieve a goal.

Previous research, according to the investigators, shows that monitoring progress, such as weighing yourself weekly to track weight loss, can encourage a person to reach their goals. 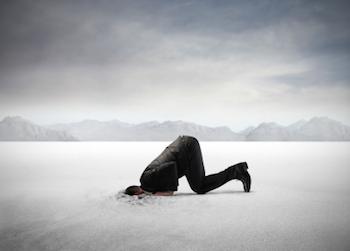 Do you have the 'ostrich problem'? Psychologists say many people tend to overspend and overeat at Christmas because they intentionally fail to keep track of progress and bury their heads in the sand - like ostriches fictitiously do.

But this latest study, published in the journal Social and Personality Psychology Compass, suggests that at times, people deliberately avoid monitoring progress because they do not want to know this information.

"There will be plenty of us over the Christmas period who will not check our bank balance or look at the calories on the back of the box of mince pies, despite us wanting to be in control of our money or lose weight," Dr. Webb explains.

"The project proposes that there is an 'ostrich problem' such that people bury their heads in the sand."

We are 'motivated' to ignore information

Dr. Webb says there may be practical reasons that explain why people fail to monitor their progress.

He notes that some individuals could find the information hard to understand, such as complicated energy bills or confusing nutrition labels.

But he says their findings suggest that people can also be motivated to avoid monitoring information.

"The ostrich problem is the idea that there are times when people would rather not know how they're doing.

Avoiding monitoring may allow people to escape from negative feelings associated with an accurate appraisal of progress. For example, people might not want to know how much money they have spent or what their partner thinks of their social skills. We call this motivated inattention."

But the researchers say it is unclear whether individuals realize they are adopting this "motivated inattention," and the team will conduct further research to determine this.

"Many of the ways in which people defend themselves against threats - and here, one might view acknowledging poor goal progress as a threat to self-integrity - are the result of unintentional biases," they say.

Earlier this year, Medical News Today reported on a study suggesting that worriers are more analytical and ignore their gut instinct.

View all articles written by Honor, or follow Honor on: