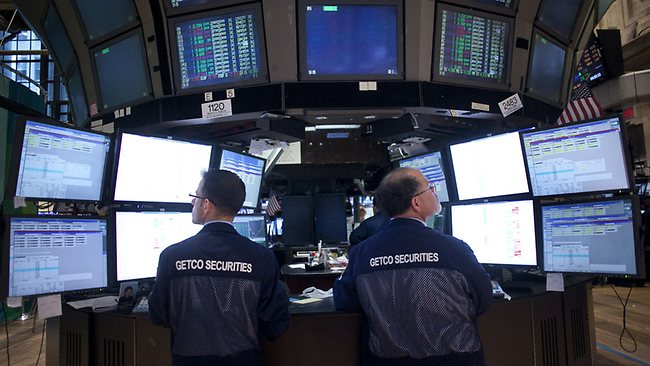 THE optimism shown on global share markets over the first three months of 2012 has shifted back to pessimism on fears that an imploding Europe will trigger another global financial crisis.


The turnaround is not a shock. It was a sucker's rally which was unlikely to last.

On March 12, we wrote here: "We can't help but wonder whether equity markets have raced ahead of reality and there could be stormy times ahead."

It's a lesson in investment cycles and market psychology. The big danger is when we focus on daily, rather than big picture, market movements.

On November 1, 2007, the Aussie share market closed at a record 6873 points. Almost five years on it is down 40 per cent; the rolling five-year average annual return for balanced super funds is just 0.5 per cent - only 5.4 per cent for 10 years.

Yet in the US 70 per cent of SP 500 companies had March-quarter earnings that beat estimates while profit growth averaged 7 per cent.

However, the slow but solid US recovery could be jeopardised by the eurozone crisis.

The April-May share crunch has basically taken markets back to where they started this calendar year.

During panic, reality is forgotten. Investors run in herds and currently the herd is spooked by the possibility of Greece leaving the eurozone. This is despite Greece accounting for only 2 per cent of the zone and just 0.4 per cent of the global economy. (In comparison Australia is 2.2 per cent.)

While Greece is a tiny economy, its investors fear a exit from the eurozone might spark a domino effect and put bigger economies such as Spain and Italy under pressure.

Plus, if the eurozone became an "opt out, opt in" community, investors would put cash only in Germany's banks - it'd be the only country to rely on.

The psychology of the markets will change only if there is a massive fundamental shift in European policy which supports the entire zone.

Cycles do change - it's just a matter of time

So far, this is a five-year bear market in global equities. History tells us five years is a long time to be in a downturn.

No one ever picks the bottom of a market but it usually is when sentiment towards one investment asset is so hated the herd turns against it viciously (the death of equities) and stampedes to an alternative (fixed interest).

We're not saying this is the bottom of the share-market bear cycle because there is still enormous uncertainty.

What we're saying is markets and investors usually overshoot on the downside and the upside. Keep a sense of balance and understand, just like booms, busts end as well and usually with a strong recovery.

A shift to yield can be dangerous

With markets tanking, there has been a big shift to fixed-interest investments, high-yield stocks and corporate bonds.

While it is a natural reaction for shell-shocked investors to exit equities, bunker down and chase supposedly low-risk, high-yield investments, this strategy can also come unstuck.

It worries us that investors think all fixed-interest and high-yield investments are similar in risk profile. They're not.

A lot of these high-yield corporate subordinated loan investments carry a lot of risk and could present a nasty surprise to investors who did not understand they are at the bottom of the payback chain.

AUSTRALIA is in reasonable shape compared with the rest of the world because:

* Our government debt is low.

WHEN US investment guru Warren Buffett says he wouldn't go near a particular stock, you take notice. Facebook is one of those stocks.

He's a "value" investor who likes to buy stocks others hate and which have had their prices slashed to below what he believes is fair value.

* He doesn't understand how the business model can make big revenues.

* The founders are selling out when it suits them, not investors.

Because of the hype, Facebook founders offered more shares at a higher price than originally planned.

It listed at $38 and at the end of its first day it closed at the same level despite predictions of big early profits.

You can't help but think the only winners are the founders cashing in.