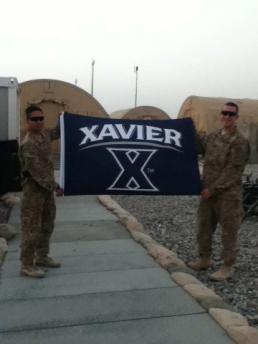 Rivera, the social worker, graduated from Xavier in 2003 with a bachelor’s degree in psychology. He commissioned via ROTC as a second lieutenant in the Medical Service Corps.

Brennan graduated from Xavier in 2007 with a bachelor’s in social work. Then he completed a doctorate from the Alder School of Professional Psychology in 2009.

After discussing career opportunities with a U.S. Army medical recruiter he found himself in Fort Sam Houston, Texas, finishing his internship and post-doctorate becoming a psychologist for the Army in 2011.

Rivera’s first deployment was as a medical platoon leader in Afghanistan in spring of 2006. He was responsible for the health and welfare of a platoon of medical soldiers.

“In 2006 there was no traumatic event management and I think I saw a behavioural health specialist once in the entire year I was there,” Rivera said.

Upon his return he went to a 14 month school and a two year internship sponsored by the Army to become an Army social worker. This deployment with 3d CR is Rivera’s second trip to Afghanistan and first as a qualified social worker.

Rivera pointed out that, Army policy now states that a social worker and a psychologist must be attached to each brigade sized element when at home and deployed. 3d CR is also allocated two behavioural health techs. Both Maj. Rivera and Capt. Brennan consistently make themselves available to the Soldiers of the 3d CR and those attached to the regiment.

Rivera stated that he has gone on patrol with 3d Cav soldiers to give himself a better understanding of what they are going through.

This is Brennan’s first deployment. Brennan stated, “I’ve treated a lot of combat medics at Fort Sam and I was prepared for a lot more kinetic activity than what is happening in our retrograde mission.”