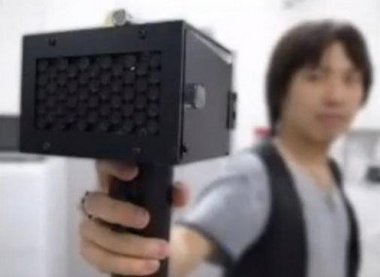 Fox NewsChances are you've been in a quiet, peaceful place, such as a library or work cubicle, concentrating intently on a task at hand, when suddenly someone's obnoxious ringtone goes off. That's bad enough. But then they answer it, and you're subjected to five or ten minutes of one-sided conversation, giggles, and abject, torturous curiosity. Don't you just want toshoot that person? Well, now you can.

And you won't even go to jail for it—for this new silencing gun, or "speech-jammer" uses not ammunition to do the trick, but psychology!

This past Thursday, Kazutaka Kurihara and Koji Tsukada of Japan presented their speech-jammer gun, a gadget that can force people into submissive silence from as far as 30 meters away.

View full sizeThe U.K. SunThe concept is quite simple. The device works by recording a person's voice as they speak via the directional mike. When the laser pointer is aimed at the speaker and the trigger pulled, their own voice is played back to them with a delay of 0.2 seconds.

Kurihara and Tsukada's tests have revealed some interesting phenomena. The device is most effective against people reading aloud compared to those engaged in conversational, spontaneous speech. It is not as effective toward nonsense sequences, such as "ahhh" or "arghh" (which unfortunately accompany many of those cell phone conversations that so irk us).

The researchers suggest that the gun could be used to silence noisy speakers in public places (mental image of black-clad librarians darting between the stacks, anybody?), or to facilitate proper group discussion and turn-taking. "There are still many cases in which the negative aspects of speech become a barrier to the peaceful resolution of conflicts," say Kurihara and Tsukada.

Let's get back to the science behind the device. Why is this sound delay so powerful in silencing someone who is speaking?

Have you ever spoken over the phone or video-chatted with someone and you can hear your voice echo on the other end? It's a rather strange feeling, and you likely aren't comfortable proceeding until your friend turns down their volume or takes you off the speaker. Obviously it's not a painful sensation—it's just inexplicably...strange. That's the idea behind the speech-jamming gun. What's going on?

In normal speaking circumstances, the brain simultaneously initiates, judges, and generates its own flow of speech based on the sound that is fed back. When there is a delay in feedback (in other words, the sound of one's voice does not arrive at the expected moment), this normally fluid speech sequence is interrupted. This is what psychologists call "delayed auditory feedback."

The silencing effect of delayed auditory feedback may be overcome by deafness or loud noise—anything that will mask the delayed sound of one's voice.

In a 2008 study published in the Journal of Fluency Disorders, Corey and Cuddapah of Tulane University examined gender differences in delayed auditory feedback (DAF) tasks. Oral reading and conversation tasks were conducted in 20 males and 21 females without feedback, with instantaneous feedback, or with 5 different delay times.

Males exposed to delayed feedback produced significantly more reading errors and a slower speaking rate compared to females in the same condition. Both groups experienced an increase in articulation errors with delayed feedback.

Another 2008 study published in NeuroImage used functional magnetic resonance imaging (fMRI), which measures changes in blood flow, to examine what is happening in the brain when registering a shift in auditory feedback. Tourville and colleagues found that both the auditory cortex, responsible for hearing, as well as the right premotor cortex, implicated in planning, are involved in registering delayed auditory feedback.

View full sizeTourville et al., 2008While there are many types of guns that may silence a person in their tracks, I would personally recommend this one if you would like to remain a free man. It's uncertain if this will ever hit the store shelves; while a neat gadget, at the same time I can easily imagine it besides the Snuggie, Thighmaster, and other "As Seen On TV" items.

Though it may be effective for GOP debates?