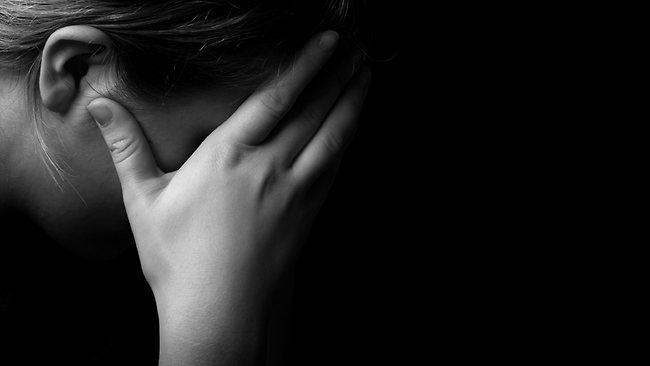 The UK is using self-help courses and books to treat people with depression and anxiety. The program has a 46 per cent recovery rate, compared to 50-60 per cent for people who seek traditional therapy. Picture: Thinkstock
Source: Supplied

AFTER crocheting a colorful blanket, Joan Ferguson snuggled up under it one night and proudly thought: "This is one groovy blanket. I'm brilliant."


Ms Ferguson, 53, who struggles with low self-esteem, said it was the first time she had ever praised herself. She attributed the breakthrough in part to free self-help classes on mental health run by Britain's government-funded medical system.

With a long wait to see a psychologist, the British government is turning to the classroom to treat people with mild-to-moderate mental health problems with a mix of PowerPoint presentations and group exercises.

Ms Ferguson's class of about 10 people, which meets once a week in east London, is led by two "psychological wellbeing practitioners." The instructors are trained for a year on how to help people change their behaviour or thinking but they aren't fully fledged psychologists.

While some dismiss the approach as do-it-yourself therapy, experts say there is convincing evidence that people with conditions like depression and anxiety can be successfully treated without ever seeing a psychologist or a psychiatrist.

The strategy was adopted after Britain's independent health watchdog ruled that classes and self-help books are cost-effective. Treating people with mental health problems this way could get them back to work quicker and save the UK an estimated 700 million pounds ($1 billion) in lost tax revenue over four years, a previous study found.

The government is aiming to use the classes to treat least 15 per cent of the more than 6 million people who need treatment for anxiety or depression. In 2011, only about 5 per cent got some kind of therapy; about half were treated in classes or settings such as telephone sessions or computer therapy.

Those with more serious problems, like schizophrenia or post-traumatic stress disorder, are usually offered traditional psychotherapy.

The self-help classes have a recovery rate of about 46 per cent, slightly lower than the 50 to 60 per cent recovery rates for those who get personal psychological counselling, according to statistics from the department of health.

The British Psychological Society, a professional group, helped design the training received by the class instructors. The society's David Murphy, however, said the classes might not be a fit for everyone.

"Some people are wary about going to a class instead of seeing a psychologist," said Mr Murphy, who isn't involved with the program.

The classes often require more effort by the individual than working with a psychologist, he said.

"For the (self-help) classes to be effective, the onus is on the patient to change what they're doing in between sessions," Mr Murphy said.

Some American experts weren't sure the approach would work in the United States.

"The expectations of treatment are very different in the US," said Michael Otto, a professor of psychology at Boston University who has studied self-help approaches.

"People think, 'if I'm going to be paying for care, I want to get the treatment I want and that's often personal therapy."

Dr Otto said the downside to such self-help programs is that people who don't get better might just give up.

Instructor Nabila El-Zanaty said the classes aren't meant to be like group therapy.

"It's more like psychological education," she said, after leading a session that taught participants how to spot negative thoughts about themselves.

She said patients must be monitored closely in case they need more intensive help. At the start of every class, they fill in a survey about their recent behaviour, including whether they have hurt themselves or had suicidal thoughts.

Ms Zanaty said she's been surprised by how much the participants are willing to share in class. She said one woman who cried during every session and talked about suicide attempts was referred to personalised therapy.

Most courses run about eight to 12 weeks. Ms Zanaty said they check in with participants a month after the classes end. After three months, they can apply to do another course if they still need help.

Ms Ferguson and her classmates in Ms Zanaty's course realise it's up to them to make sure the classes work.

"They only give us the tools," she said. "I know if I don't practice the techniques, it will be back to square one."