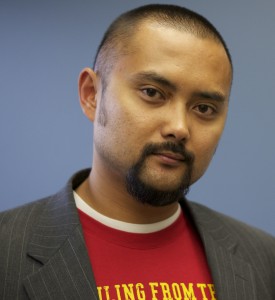 Assistant psychology professor EJ David received an award this month from the largest organization of psychology professionals and scientists in the United States. David’s research in Filipino /- American psychology is gaining national recognition, as he was recently named the winner of the American Psychological Association’s Early Career Award “for distinguished contributions to the field of racial and ethnic minority psychology,”

According to APA’s website, the award is granted to scientists who have made significant contributions to the field within the first nine years after earning their Ph.D. in psychology. Though this honor is a great step forward for David, it is also a great step for UAA, where he is not only an educator, but also an alumnus.

David came to UAA from Winder-Barrow High School on a UA Scholars scholarship. Like many students at university, his academic direction shifted as he continued his schooling.

“I really had no direction,” David said. “I thought the only thing I was good at was drawing, so I tried to get into fine arts. … I was taking arts classes my first year, until I took an intro psych course.”

David immigrated with his family from the Philippines while he was in middle school. He was teased for his culture, causing him to ultimately reject it and grow disdainful toward other Filipinos that didn’t fit in. As a junior in high school, he began to realize that the attitudes he had toward his own culture were harmful. However, it wasn’t until his sophomore year in college that he discovered the field of psychology could provide answers to the questions he had about his changed attitudes.

“[My] intro psych class began to open my eyes a little bit about some of the questions I had about myself,” David said. “Why did I feel this way, why did I act that way, why did I think that way about Filipino culture.”

John Petraitis, David’s psychology 101 professor and mentor took note of David’s enthusiasm early on. He said, “EJ got through the [psychology bachelor's] program faster than any other student I’ve ever had. He would be taking like, twenty credits a semester. … I always knew him as eager, hard-working, excited about material — that’s all I’ve ever known him as.”

David’s undergraduate experience in the psychology department allowed him to learn about the internalized oppression in both himself and marginalized cultures as a whole. He later took that interest and turned it into the topic of his research career. He calls the beginning stages of his research “MEsearch” because of his work’s introspective origins.

In his MEsearch, David discovered that Filipino -/ Americans adopt a “colonial mentality,” or internalized oppression. David’s website, http://www.colonialmentality.com, describes the effects of colonial mentality, citing the increased use of skin-whitening products, the rejection of Filipino culture and the preference of United States-made products over Philippines-made products.

His book “Filipino -/ American Postcolonial Psychology: Oppression, Colonial Mentality, and Decolonization” describes the history and implications of that phenomenon, and the breadth of his research for the publication is what earned him APA’s Early Career Award.

Despite David’s national recognition, his post-secondary and professional achievements were not accomplished alone.

“Winning this award makes me look back to all of the people who have helped me throughout the years,” David said. “I think of the Vinas and the Harcharek families for taking me into their home when I was homeless, I think of my mentors at UAA who guided me when I was a naive undergrad, I think of my lab mates and mentor at the University of Illinois who opened up my eyes and my world. This award really is a product of the help, encouragement, and guidance that I have received throughout the years. As many Filipino children are taught, ‘A person who does not know how to look back to where he or she came from will never get to his or her destination.’”

In order to share Filipino culture and history with others, David is part of the Alaskero Partnership Organizers (APO), who organize lectures and activities every October for Filipino American History Month. For the past three years at UAA, APO has set up open events for Filipino comedians, musicians, dancers, and professionals to share their work with the Anchorage community. Last year featured Connie Mariano, who was the first Filipino-American rear admiral in the US Navy and the first military woman to be appointed as physician to the President. APO met recently to plan this year’s speakers and events.