A pioneering research team has discovered a way to turn the drudgery of regular exercise into a robot-like, automatic response.

Unlocking this secret can be enormously powerful because, no matter how good for us we know it to be, it still takes enormous willpower to actually get up off the couch. New research shows that unlocking an unquenchable desire for exercise relies on having a cue, or habit, for the activity.

Until now, many assumed — wrongly it seems — that exercise itself can become a habit. It is a mainstay of motivational posters and dinner party pop psychology.

• How much exercise do you actually need?
• Forget fat: these three food ingredients are far worse
• It’s official. This is the best diet for losing weight
• The seven essential health checkups you need

But this ‘fact’ has actually been “underresearched,” the authors team wrote in the Health Psychology journal.

Forming such an exercise habit would be nearly impossible, an expert whose work was referenced in the UK study told The New Daily. 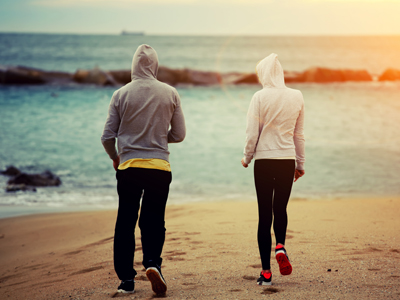 In this cold, can you actually be bothered? Photo: Shutterstock

“You’re going to yoga on a Monday and Tai Chi on a Thursday and so on. So actually it takes a heck of a lot of time for any of that to become habitual because they’re all quite different,” Curtin University health psychologist Associate Professor Barbara Mullen said.

Instead, the secret is to form a habit that triggers exercise. If you can do that, the exercise itself will flow naturally.

“Exercise habit need not be scripted or automated once the goal or decision to exercise is triggered,” the research team wrote.

The researchers came to this conclusion by tracking the month-long exercise of 123 adults, examining how often they chose to begin exercise versus the workouts they actually completed.

We need to be prompted

“If there’s no catalyst to initiate our behaviour, we just won’t do it.

“This is despite knowing why we should exercise, the reward we get, or even what exercise we should do.”

Natural Heart Health exercise scientist Angela Jackson said she already recommends these triggers to her clients because they fit in with how the human brain works.

“They’re helpful because every time our brain associates a new habit with an already concreted habit, it makes that neural connection a little bit stronger,” Ms Jackson said.

“These preliminary results suggest that building a habit of making the decision to exercise is more likely to lead to regular exercise than building habits within your exercise routine,” Dr Hamilton said.

“This is encourage for people who like to mix up their exercise routines for variety and enjoyment.”

How to pull the trigger

Context-based cues are the most effective, Assoc Prof Mullen said.

She is currently researching how to link the act of tooth brushing to beneficial behaviours, like remembering to take medication.

The same link could be made to exercise, she said.

“The vast majority of people brush their teeth in the morning. It’s not something you think about.”

Other possible triggers include:

• putting on your running shoes as soon as you get home from work;
• checking the mail box before you go for a run;
• laying out your athletic gear on the bedside table ready for your morning session; and
• doing squats and push ups when you fill up the kettle for your morning cuppa.