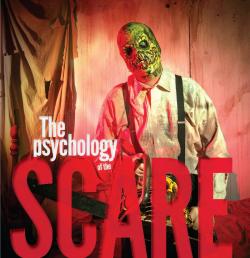 It’s hard work for performers at Fright Nights at the South Florida Fairgrounds who spend their evenings in makeup, creeping, screaming and doing their best to get under people’s skins. ADAM BARON /Florida WeeklyTHE HORDE IN RED ROBES WITH EXPRESsionless faces, void of individuality, stood by the general, the doctor and the executioner in their haunted house, dress rehearsal huddle. “Go for the chicken,” coached creative director Craig McInnis. “Don’t waste your big scare on the front of the line if the person hiding behind the first person is like this,” crouching and trembling in fear. “The best thing that can happen to you,” he taught his cast, “would be for the biggest chicken to be right in the middle, ‘cause if you scare that person, they’re going to jolt and it will ripple.”

The coaching continued: Don’t forget the back of the line. Give them some action. Give ‘em a scare, not the same scare, a fresh scare. Those end-of-theliners think they’ve made it through your room, whisper in the last guy’s ear, something chilling, right before he turns the corner. If it’s a girl, blow her hair: “Woo” and disappear. 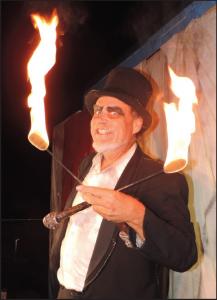 Doc Swan performs at Field of Screams at JetBlue Park in Fort Myers.
COURTESY PHOTO Beware, there will be sprinters. Better a sprinter than a crawler. You’ve got to move those crawlers out of your room before the next group comes in and clumps up, nothing scary about a conga line.

Keep your vocal chords hydrated. You can’t speak at a fever pitch every night, ‘cause if you get laryngitis, you can’t do your job. You can’t shuffle alongside a group of teenage girls screaming their faces off and ask, “Why are you here?” You can’t greet the horror hungry with a hearty, “Welcome to the New World Order,” the Orwellianthemed haunt at Fright Nights at the South Florida Fairgrounds in West Palm Beach.

No swearing. No touching. Those are the two rules of Fright Nights. “But you can threaten them,” Mr. McInnis tells his ghoulish enthusiasts, though he does not recommend a threatening scare to the face of “Johnny Steroids,” that’s how you get a black eye or a fat lip, but those are the scares he loves the most — the adult male — that’s the target, that’s the reward, scaring the tough ones, the more tribal tattoos the better, bonus if he’s wearing an Affliction T-shirt.

That’s why these actors, these creative directors, these scary, little devils do it. They get paid peanuts and risk twisted ankles, but they are hooked on adrenaline, and if they’re not the ones feeling the rush, they want to be the fright, the startle, the stun to chill the spine, race the heart, raise the neck hairs. They believe people want to be scared to feel the relief of living through it. They study the science of the scare, so people can step into the nightmare of Halloween and escape it.

To scare people, you have to get inside their heads. Mr. McInnis says it starts with the advertising. The grittier, the grimier, the more dangerous the haunts appear.

The atmosphere must amplify the scare and arouse the senses — the sound of chainsaws, the smell of rotting corpses, the sight of blood still shiny and wet.

Designers employ the same handful of scares, reimagined. The direct scare, “Muahaha!” The distraction scare, lure you into feeling a sense of security, something comes from somewhere else and gets you. A blast of air, the animatronic scare. The scare of anticipation, hearing the screams of those that dared to tread before you, the suspense of wondering, ‘What happened? What’s going to happen?’

Musing on the evolution of fright, Mr. McInnis fears the subtlety has fallen away.

His creative process starts with his notebook. Its pages show his brain. He always has it near to sketch some character, scribble some dialogue.

He weaves subtlety into his designs. He likes you to have 30 seconds alone so you can be scared by your own head. It’s amazing where your brain can go in 30 seconds, similar to what Mr. McInnis’s brain can do with a blank sheet of paper.

Pondering the popularity of fright, Mr. McInnis says, “Escapism is a necessity. Life sometimes gets too serious, too mundane and definitely too vanilla. We need to mix it up.”

The doctors will see you now

To escape the anxieties of real life, sometimes you need a vicarious scare, to fear for another. Doc Swan, Psycho Sideshow entertainer, does things with fire, swords and icepicks that people peek through their fingers to see.

Having shivered crowds at Six Flags and Walt Disney World, he now performs in the Field of Screams Village at JetBlue Park in Fort Myers, a new Halloween event also featuring a haunted hayride, designed by Doc Swan.

As a boy, he would string spiders behind cupboards or place dolls on rockers to scare his mother out of her skin. Back then, he sometimes felt guilty for scaring others. He would apologize. That’s such a foreign thought to him now, he can’t imagine feeling guilty for scaring people.

As he came of age, he accepted his fervor for the fiendish. Told himself, “My ideas really do scare people, and that’s a good thing, because that’s what I want to do, and people like being scared.”

As he’s talking, a zombie commercial comes on his TV, as if to prove his point.

“I’m a human being just like everybody else,” Doc Swan says. “I love ice cream, I love Christmas, I love picnics and I love to get scared.”

Whether it’s a roller-coaster drop or a zombie-charged hayride, Doc Swan says people want to clutch their hearts to feel their hearts. They want to be scared to feel the relief of living through it.

Earning his Ph.D. in psychology, Dr. Jonason has taught social psychology and evolutionary psychology at universities in Florida and Alabama. He now lectures on personality or individual differences at the University of Western Sydney in Australia. He was awarded the 2014 Ig Nobel award in psychology for his research into the “darkside” of human nature.

Expanding on the psychological validity of seeking out a scare to survive it, he writes, “The relief we feel is related to the relief one feels that their life is not going to end. This is all part of the fight-flight and resolution response. Fear activates these systems to get us ready to run, fight or flee.”

He describes fear as “a psychological system evolved to alert us to dangers,” individuals not sensitive to fear, would have been selected from the species.

Though some may want to pontificate on what the spread of haunted attractions says about today’s society or communal mindset, Dr. Jonason boils it down to fun.

“We have become a culture of entertainment. The proliferation of movie theaters, amusement parks, haunted houses … are all manifestations of the prioritization of ‘fun’ as a social value,” he writes. “Our grandparents just got up, went to work and lived on. It is the modern generations that institutional enjoyment has taken over. This might very well be part of the increasingly narcissistic population that characterizes western, and American in particular, culture. That is, it is not about communalism at all. It is about enjoyment.”

There you have it, the why behind the scare, the critter behind the trapdoor: Joy. ¦