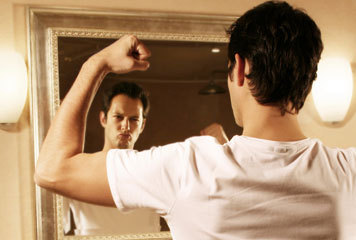 Batman may be saving more than Gotham City. For throngs of devoted male fans, the muscular superhero may bolster body image too, according to a new study.

Men in the study who said they felt a bond with Batman or Spider-Man also reported feeling more satisfied with their own bodies after seeing a picture of the muscular superhero, while men who felt indifferent toward the superhero felt worse about themselves.

Previous research suggested that seeing muscular male figures makes men feel bad about their own bodies. But the new results suggested that men who felt a personal connection with a svelte superhero are free from the typically damaging effects of seeing an unobtainably buff physique.

In fact, in some cases, looking at pictures of a superhero actually increased men's strength, the researchers found.

"For some men, exposure to extremely muscular superheroes may actually have a positive effect. It may make them feel better about their bodies," said study researcher Ariana Young, a graduate student in psychology at the University at Buffalo in New York.

In the study, Young and colleagues asked nearly 100 male college students how much they liked two popular heroes of the comics and movies, Batman and Spider-Man, to determine how bonded the men felt with those characters. The researchers also manipulated images of the two superheroes to look either muscular or skinny, and showed each picture to the participants.

Men who had just viewed the muscular-looking picture of their favorite superhero also showed greater strength on a handgrip test than those that had seen a non-muscular version of the superhero.

The researchers found that the participants' own physiques had nothing to do with whether they felt more or less satisfied with their bodies after seeing the muscular images, or how they performed on the grip test.

A previous study involving women and images of ultra-thin female celebrities produced similar results: Women who felt a connection with a thin celeb felt no worse about their own bodies after looking at pictures of that celebrity. Identifying with a thin female celebrity may lead women to perceive their own bodies as thinner, according to the researchers.

While much of the research on body image issues has focused on women, body dissatisfaction is a growing problem among men, said Jesse Steinfeldt, a sports psychologist and professor of counseling at Indiana University.

While the pressure to conform to muscular stereotypes isn't new, "men are more inundated today than in the past with images of big, jacked-up-looking men and 'Here's what you should look like' messages," Steinfeldt said.

Previous research of men linked body dissatisfaction to low self-esteem, depression, steroid use and an unhealthy preoccupation with their muscularity.

But the allure of Batman may come from more than his rippling muscles.

"The comic book superhero was invented to address male vulnerability. Men who have actually read the comic books are exposed to all sides of the superhero and not just his body type," said Sharon Lamb, a professor of counseling psychology at the University of Massachusetts, Boston and co-author of "Packaging Boyhood: Saving Our Sons from Superheroes, Slackers, and Other Media Stereotypes" (St. Martin's Press, 2009).

"I think the study shows that boys and men need role models who are whole people, and if they get those kinds of role models, they feel better about themselves, their vulnerabilities and their bodies," Lamb said.