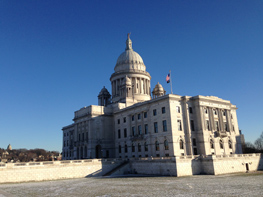 As grassroots supporters from across the state prepare for hearings before the Senate Judiciary Committee on marriage equality legislation, the broad coalition supporting allowing all loving, committed Rhode Island couples the freedom to marry continues to grow. Today, the Rhode Island Psychological Association offered the following endorsement of SB38, sponsored by Senator Donna Nesselbush, and mirror to HB5015, which overwhelming passed the House in January.

"The Rhode Island Psychological Association is proud to stand in support of allowing all loving, committed Rhode Island couples the freedom to marry," said Dr. Lisa Rocchio, president of the RIPA Board of Directors. "Denying all families and children of same-sex couples the unique protection and recognition of marriage places those children at risk of experiencing the profound and lasting impact of discriminatory practices. No family in the Ocean State should be told their love and relationships are somehow less valuable or meaningful than those of their friends, family and neighbors.

The Rhode Island Psychological Association endeavors to promote the general welfare and well-being of individuals, families, groups, and society as a whole, and to advance Psychology as a science and as a profession. Founded in 1955, it represents almost 200 licensed psychologists throughout Rhode Island.

"We greatly appreciate the support of RIPA and thank them for their strong, professional endorsement of marriage equality legislation pending before the Senate,” said Ray Sullivan, Rhode Islanders United for Marriage campaign director. “This is an important reminder on the importance of families – all families – in the lives of Rhode Island children. Current law, which makes it illegal for LGBTQ mothers and fathers to marry the person they love and provide that important stability for their children is just one more reason for the Senate to pass SB38 and bring full marriage equality to the Ocean State.”