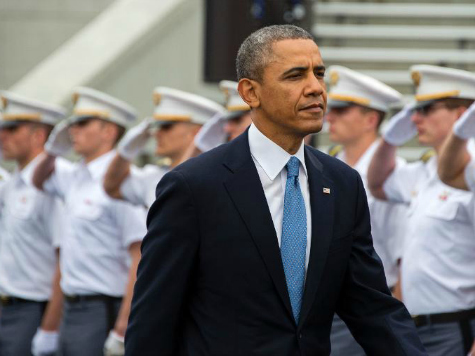 From the vantage point of the just-about-to-graduate cadets at West Point, it must be very cool to have the Commander-in-Chief be your commencement speaker. Perhaps the 'wow-factor' is diminished when the speech is one that underlines why America isn't important and how the biggest war of the last decade is about to be lost.

For those who really must go to the source the full text is here. For those with shorter attention spans see the excellent and almost instantaneous analyses by my Breitbart colleagues Joel Pollak and Charlie Spiering​.

Here is another take.

What can I say? Bluntly: as a professor of irregular warfare and international security I cannot recall ever reading a more confused speech by a head of state, nor one that is so utterly detached from reality. From the opening passages that speak of how the world automatically looks to America when "schoolgirls are kidnapped in Nigeria, or masked men occupy a building in Ukraine," to the president later taking credit for the fact that "more people live under elected governments today than at any time in human history" it feels as if the President is living in an alternate reality.

Please don't misunderstand me. I agree that the world does look to us when there is a crisis or a vicious wrong to be righted. But when we respond with hashtag "assaults" via Twitter instead of actual commando raids to rescue the Christian girls captured by the jihadists of Boko Haram, or when we deploy 600 troops to Poland and the Baltic states as Russia moves 30,000 troops in their APCs and tanks to the border of Ukraine, I am at a loss at to what there is to be proud of.

Then we see the idea that an administration which sees "Climate Change" as one of the greatest threats to the nation – if not the greatest – and which labels the deaths in Benghazi as a "fake scandal" is in fact the reason that more people live in freedom today than ever, and it seems as if we are Neo from the Matrix and have popped the blue pill.

The President's speech is full of these surreal assertions that bear no resemblance to the actual world we live in. He spoke of an America that will not allow regional aggression to go unchecked, whether "in southern Ukraine of the South China Sea, or anywhere else in the world,[!]" and then that we cannot live in a world where people are "slaughtered because of tribe or faith or political belief." This on the same day as more than 30 people were massacred in a Catholic church in the Central African Republic.

Then there is the schizophrenic logic of the address.

The Commander-in-Chief said Wednesday, "Here's my bottom-line: America must always lead on the world stage." We can ignore whether this is what the administration has embodied for the last five years, because the speech itself is clear that we are not meant to understand "lead" in any classical or conventional way. For the rest of the address President Obama was clear; his definition of leading means that we should avoid the use of force or military assets. Instead it is our "partners" that will respond. Perhaps we could call this the doctrine of America Leading by Proxy. For "invading every country that harbors a terrorist network is naive" and because what this administration wants is "collective action" because it works.

The proof the President provides that this leading without leading works? Ukraine and Iran.

No, I am not joking.

According to President Obama, the fact that Ukraine elected a new President this weekend "without us firing a shot" is proof that the international system and America's leadership of it works. The facts that Crimea is now part of Russia, that Tuesday saw the heaviest death-toll since the crisis began, and that now Putin seems to be making a move against Georgia are somehow not indicators of failure.

Then there is the success of Iran. The President actually stated today that his version of leadership has been vindicated by our decision to "extend the hand of diplomacy" to the mullahs. This just three days after the Supreme Leader in Iran declared that the United States must be destroyed through Jihad. (No, I am not making this up. The details are here.)

After all of the above – and more – the President calls this approach "the right way to lead."

Most disturbing of all is the decision to leave Afghanistan. Despite closing his speech by referring to a West Pointer who lost a leg in that god-forsaken war zone, the president does not explain how what he used to call the "good war" has finally been won and why we can go home.

War is not about institutions, battle-plans, or even hardware. It is ultimately defined by the will to defeat your enemy. The enemy that killed 3,000 people in Manhattan, Washington, D.C., and Pennsylvania thirteen years ago now has followers fighting in Yemen, Syria, Egypt, Mali, Nigeria, Libya, to name just a few of the jihadi-infested lands around the world. How will our leaving Afghanistan be received by al Qaeda and its allies? Will they feel as if America has imposed its will upon them?

President Reagan once famously said to his future National Security Adviser, Dick Allen, that his vision of the Cold War was that “We win, they lose.” If Ayman al Zawahiri, the current leader of al Qaeda, is listening to President Obama's speech somewhere in South Asia – and I know he is – I am sure he does not think our withdrawal from Afghanistan means that we have won and he has lost.

Sebastian Gorka PhD has recently been appointed the Major General Horner Chair of Military Theory at the Marine Corps University and is the editor of national security affairs for Breitbart.com.