The bottom end of the Eastern Conference playoff race has become a case study in psychology.

In Washington, the players are questioning themselves after a costly home loss on Friday night to New Jersey. The Toronto Maple Leafs finally pulled the plug on Ron WIlson’s coaching tenure and new bench boss Randy Carlyle says his first job is to restore the Leafs’ confidence.

And the stumbles by these two teams have opened the No. 8 spot in the East to whatever team wants to stake a claim.

Five teams legitimately believe they can be the No. 8 team. The Winnipeg Jets, who have the spot right now, are 8-5-1 since the beginning of February. But they continue to suffer in the projections below because they have 16 games left, while the four chasers have 18.

Washington’s 5-0 loss to the Devils on Friday was devastating to their chances. The Capitals own the third best home record in the East at 21-9-2. Every home loss is a wasted opportunity where the odds are in their favour.

As Washington Post reporter Katie Carrera noted, the loss was “another gut punch in a year marred by frequent flat performances and inconsistencies. With the significance of each game magnified, the players were at a loss to explain how they deflated so quickly and fought back so little.”

“After the third goal, we just seemed like a deflated team,” the Capitals’ Jeff Halpern said. “It’s a complete knock on the guys in the room. All of us, myself included, for having absolutely no response.”

Meanwhile, after four months stuck in third gear and being a seller at the trade deadline, the Tampa Bay LIghtning has suddenly won six of their last eight games to climb into the picture, four points behind Winnipeg.

And Buffalo, also a seller on Monday, is 5-0-1 in its last six. The run includes back-to-back road shutouts from goaltender Ryan Miller.

Washington’s loss altered the projected cut line in the East. It has now been revised down to 89 points, opening the door for the chasing teams. To get to 89 points, Toronto still needs to win 12 of its final 18 games, though. Tampa Bay and Buffalo need to go 11-7-1. Winnipeg needs to go 9-6-1. Washington needs to go a more manageable 10-8. Those pesky three-point games, of course, alter the landscape without notice.

In the Western Conference, Dallas’s 3-1 victory in Edmonton raised the cut line to 92 points. Meanwhile, Calgary lost 3-2 in Anaheim, meaning the Flames will have to finish 11-5-1 to reach 92 points. 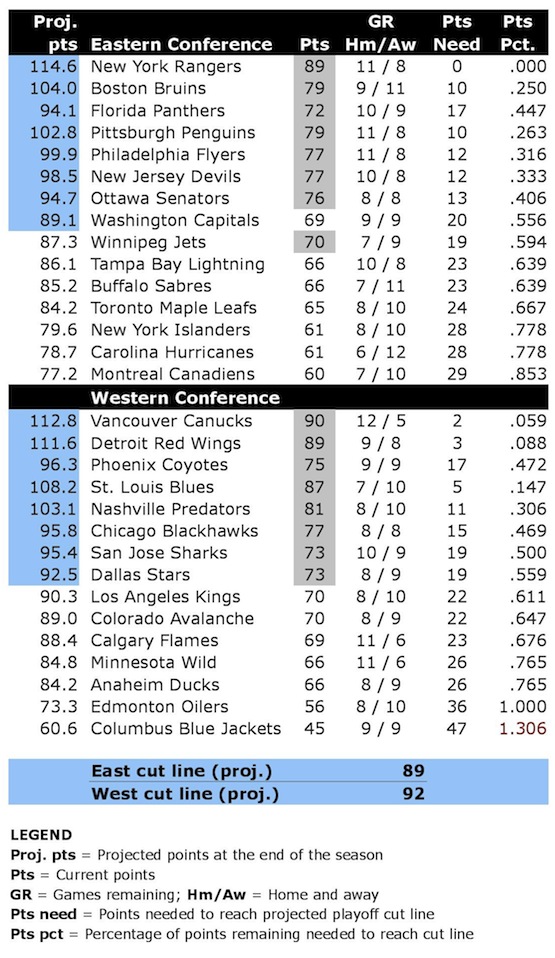