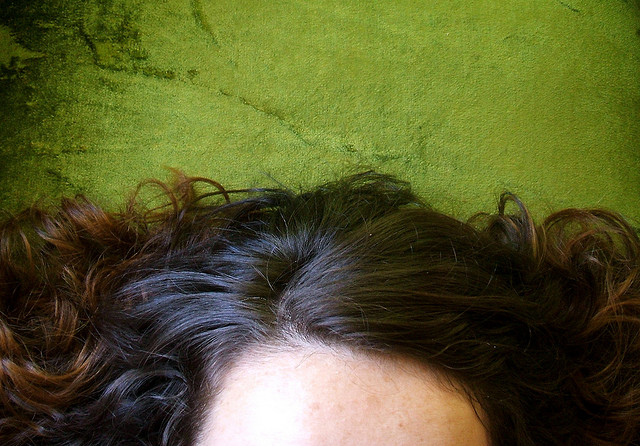 Is our climate problem really all in our heads?

I don’t mean the question in the way that global warming deniers might: that climate change is an illusion or hoax. The science overwhelmingly shows that the world is heating up rapidly and, according to a study out just this week in Nature Geoscience, three-quarters of that warming is directly due to human activities. Rather, do we as a human species have some kind of psychological block that bars us from confronting the issue forthrightly?

Evidence of the frustrating lack of progress on climate issues abounds. A new analysis by the Global Carbon Project finds that in 2010, with the recession’s end, worldwide emissions of carbon dioxide (CO2) jumped by 5.9 percent, the largest absolute increase since the Industrial Revolution. The International Energy Agency’s latest World Energy Outlook warns that mankind is just five years away from locking in 2 degrees Celsius of warming and on a track that would eventually add 6 degrees C. The major reinsurer Munich Re considers the odds that warming will be held to just 2 degrees C. are “extremely slim.” Rumors preceding this week’s international climate talks in Durban, South Africa, suggested that industrial nations have largely abandoned interest in negotiating significant restrictions on CO2 that would kick in before 2020. 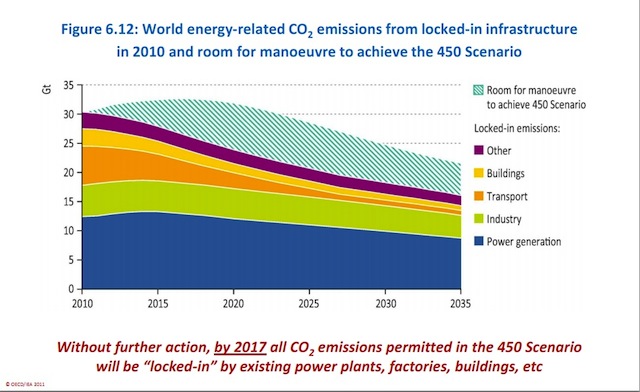 Obvious practical reasons for the resistance to addressing climate problems aren’t in short supply. Altering our energy and transportation infrastructures to release fewer greenhouse gases will involves massive public and private investments. There’s also plenty of legitimate debate about what measures to take on climate. Do we need to build more nuclear power plants? Are carbon taxes better than carbon cap-and-trade systems? How do we balance poor nations’ immediate needs for plentiful, cheap energy with goals for curbing the energy sector’s environmental impact? All good questions.

But in recent years, some academics and observers of the climate debate have advised that the real obstacles are unconscious psychological factors that thwart efforts to engage with the issues. They’ve further argued that many of the arguments and strategies used to address climate change are therefore misguided or even counterproductive.

Are they right? To a degree, surely yes. But the relevance of their psychological insight is overstated in my opinion, and it provides too many easy excuses for those looking to avoid the urgent, difficult steps that the problem seems to call for.

Believe what you want

First, let’s consider the nature of the psychological factors that have been mentioned. An abundant literature in psychology and behavioral economics, perhaps crowned by contributions from 2002 Nobel laureate Daniel Kahneman of Princeton University, has established that we Homo sapiens are disappointingly irrational in our evaluations of risks. We are particularly poor at sizing up situations that involve slowly mounting consequences (particularly if they will befall other people first) or low likelihoods of catastrophic outcomes. These, of course, are precisely the dimensions of the climate problem. 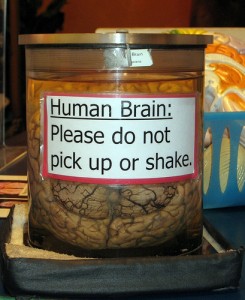 Motivated reasoning is another phenomenon psychologists have identified: people rationally justify what they want to believe and recoil from what’s threatening or unwelcome. The idea that people are skeptical of climate change because they lack sufficient information about it is crucially wrongheaded, warn those researchers — and efforts to hammer home the scary consequences of global warming will only harden the opposition. For example, a forthcoming paper by Robb Willer and his colleagues at the University of California, Berkeley, in the January issue of Psychological Science finds that people are more likely to disagree with gloomy presentations of climate science than with more hopeful ones.

But a more sweeping suggestion, buttressed by studies like one last August in Communication Research by P. Sol Hart of the American University and Eric C. Nisbet of Ohio State University, is that climate change suffers from a “cultural cognition” problem. Cultural cognition is an idea pioneered by Dan Kahan at Yale University and others that people’s beliefs and perceptions are overwhelmingly shaped by sets of values picked up from the groups to which they belong by birth or by choice.

All of us may believe that we listen to evidence, weigh it rationally, and then draw our conclusions. But in reality, at every point in that process, our values discount or emphasize aspects of that process unevenly. Consequently, the cultural cognition theorists say, people’s positions on issues such as climate (as well as abortion, gun control, the teaching of evolution and so on) act as markers for their social identity.

At first blush, that insight may sound obvious. It isn’t really news that our families and societies shape our thinking. What’s profound about the cultural cognition argument is the claim that, in a sense, people with different values live in different realities: they never even experience the basic facts of certain problems the same way.

All these arguments seem to build a case that climate change is an issue so emotionally freighted against dispassionate evaluation that any policy that demands wrenching, immediate change is all but impossible. Psychological critics therefore often urge that the climate lobby should forsake divisive, demanding head-on action on CO2 and instead reframe the climate in terms of values with a broader consensus. Skip the annoying CO2 restrictions and go for beneficial energy reforms alone (even if that means letting the chips on future warming fall where they may).

Perhaps I’m just showing my own cultural roots by saying this, but although I completely accept that cultural cognition and motivated reasoning strongly influence our attitudes about climate, I don’t accept a simple, fatalistic reading of the research to prove that we can’t do better. Drafting realistic climate policy is always going to be hard and controversial, but I don’t think it has to be futile.

Surely, people don’t routinely want to recognize other kinds of highly inconvenient crises, too: epidemics, storms, bankruptcies. And yet they come to grips with their reality. Governments manage to fight unpopular wars and bail out unpopular banks. Civil rights struggles discomfit big segments of American society with committed cultural aversions to recognizing the rights of African-Americans, women, gays, and others. Somehow we’ve made progress on those fronts, too. Why not climate?

Personally, I’ve also always been annoyed by the characterization of climate scientists and their message as hopeless or pessimistic. Scenarios of rising sea levels, future droughts, extreme weather and so on that come out of climate models aren’t cheery. But many of the scientists who spoke out early and loudly on the dangers — such as James E. Hansen of NASA and the late Stephen Schneider — also emphasized that these worst-case outcomes could be avoided with reasonable, affordable investments in renewable energy and CO2 reduction. Their message was that we could do something about the problem. If people see climate science as negative, then that’s an impression others put on it, not something intrinsic to it. 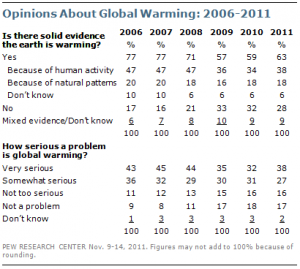 The psychological arguments alone also don’t clearly explain why outspoken anti-scientific opposition to climate protection is such an oddly Anglo-American phenomenon. The G.O.P. seems to be the only major conservative political party in the world that takes a strenuously anti-science stance on climate. Conservative principles don’t seem to be irreconcilable with sound climate policy elsewhere.

Moreover, public opinion in the U.S. at least seems fickle on the issue—more so than I would imagine core values or aversion to negativity would dictate. A recent Pew Research Center survey finds increasing belief that global warming is a serious problem, even among Republicans. Andrew Revkin, the former New York Times environmental reporter who still writes its Dot Earth blog, has described such shifts in public response as “water sloshing in a shallow pan.” But the poll data show that a well-timed political push can take advantage of popular support for leverage.

The truth is, however, the masses aren’t the ones setting climate policy. Politicians are, and quite frankly, I’m not patient with arguments that cultural cognition or motivated reasoning gives them an excuse to duck the objective facts. Rather, the voting records of the U.S. Congress often seem to suggest that protecting the economic interests of the fossil fuel industry have loomed larger in their priorities.

Our species’ irrational side adds to the genuine, inescapable complexities of forging sound climate policies. But I suspect the more immediate obstacle to climate progress isn’t cultural cognition so much as it is political cowardice.