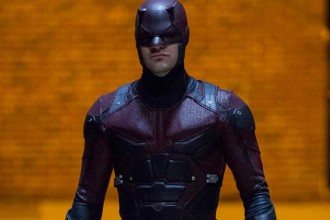 What motivates the Man Without Fear? This question and others were discussed last weekend at Long Beach Comic Con's Psychology of "Daredevil" panel. Moderated by Comic Vine Editor-in-Chief Tony Guerrero, the panelists focused their points on the characters and events of Marvel Television's Netflix series. Writers Christos Gage and Ruth Fletcher Gage were joined by actors Tommy Walker (Francis) and Peter Shinkoda (Nobu) and clinical psychologist Dr. Andrea Letamendi as the group discussed what drives the characters of the hit series.

The panel kicked off with a simple question, albeit one with broad implications: How stable is Matt Murdock (Charlie Cox)? "When we started in the writers' room with Drew Goddard, we talked a lot about his motivations -- the fact that he lost his father and the fact that he was blinded as young man," Christos Gage said. He touched upon how Daredevil is unique in that he's one of the very few superheroes in comics who has an established religion. It has been fascinating to explore the consequences of someone who's driven to do good and do the right thing but "is struggling with the fact that it really might damn his soul."

Father Lantom (Peter McRobbie) played a role in helping Matt walk the line, expained Ruth Fletcher Gage. "[He] was almost Matt's therapist. He was used in a lot of different ways. We wanted him to be someone who would actually discuss the things Matt brought to him."

"Father Lantom really was supposed to be a catalyst to force Matt to question his own view on things and his own feelings about what he was going to do," Christos Gage added. "The great thing about Season 1 is that it was Daredevil: Year One. We're seeing Matt Murdock become Daredevil, and we're seeing Wilson Fisk become Kingpin." Matt is still figuring out his boundaries, he explained, clarifying that he didn't kill Nobu on purpose in the ninth episode. "We all know something about Hand ninjas -- they have a tendency to be resurrected -- I'm not saying that's going to happen." 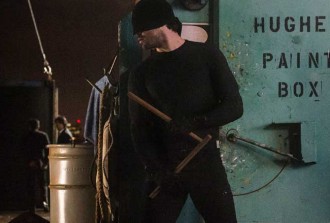 Speaking of Nobu, Shinkoda touched on what he believes were the character's motivations. "I think that he's driven almost religiously, like Matt, except that the stakes may be higher for Nobu than Matt. The way I played it, I assumed he may be a member of The Hand, he's part of some program that's been going for hundreds of years. I think he has global plans. They're huge. They're not only affecting him." These theories helped him bring an intensity to his performance.

Fletcher Gage said Nobu was their way of showing the bigger world. Marvel wanted "Daredevil" to be street level, and for Matt to be an ordinary person, but they also wanted to have parts of the world that were bigger than just Hell's Kitchen. "From the very beginning, Peter had to walk that line more than anyone else in the show," she explained. "His character was really the only character that we let the cat out of the bag, which was 'Oh, wait a minute -- the bigger plans are bigger plans.'" Gage added they do keep in mind "Daredevil" takes place in a world where there are gods with magic hammers, saying they almost brought in immortal Hand assassin Kirigi for Matt to fight in the ninth episode rather than Nobu.

Throughout the first season, Matt Murdock constantly wrestled with his dual identity, and it has an effect upon him. "It's very complex," Dr. Letamendi explained. "He's developing this mission about what it means to defend his city -- and he calls it his city -- and he has to hide it from people he cares about." Along the way, "He has to test himself along lines of violence and brutality. I think it's great that there's this duality with his psychology. The positive side is that he's developing this amazing superhero role, but he's dealing with very human problems a lot of us have." Matt has to question how his participation in that violence and brutality helps or harms things, she explained. Essentially, Matt has to consider whether he's becoming another cog in the machine. 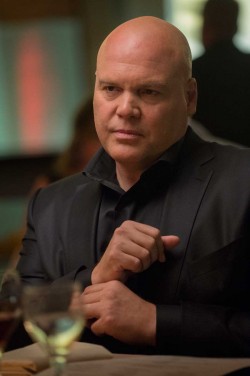 Letamendi believes Matt is driven not just by the accident that caused his blindness, but also by his relationship with his father. The loss of whom possibly triggered post-traumatic growth -- Matt responded to the trauma with strength. Gage thinks Matt has a deep anger within him. "I don't think he would admit this, but I think he's angry at his father. I think he channels it by beating up the kind of people who took his father from him."

Another layer of identity was added when the familiar red costume was brought into play. "It was a very specific decision not to have it [the costume] appear until the last episode," Gage said. "Matt literally lives in a neighborhood devastated by a superhero battle. If you talked to Matt in Season 1 and called him a superhero, he would have been offended. 'Those are the guys that wrecked my neighborhood, that's not me.' He's more of a symbol now. One of the things we came up with early on was him being branded as the devil of Hell's Kitchen. In a way, the costume and identity of Daredevil -- even though he doesn't choose it -- is him trying to get back some degree of that identity."

Fisk (Vincent D'Onofrio) was, of course, the one who called Murdock the devil, and in throughout the first season, a different side of the iconic villain's personality was showcased through Vanessa (Ayelet Zurer). "She allows us to see the compassion Fisk has, and it's genuine that he's so loving and heartfelt and compassionate -- he has this sense of connection to humanity," Letamendi said. "It's so interesting to have that dynamic and that this incredibly intelligent, powerful woman brings it out in him."

"It was very important to Drew from the beginning that we really see that Wilson Fisk believes that what he's doing is right -- that he's not just a garden variety sociopath," Fletcher Gage added.

The show described Fisk as sort of a child and man all in one, revealing his moment of transformation in the flashback where a young Fisk killed his father in order to protect his mother. "In a way," Letamendi noted, "it's almost like his father taught Fisk how to kill him."

Discuss this story in CBR's TV/Film forum.
|  No Comments