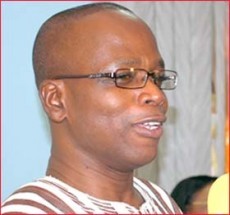 Some tend usually to display arrogance and intolerance towards opponents. But psychology has it that those who indulge in such unethical behaviour do so out of that instinct of wanting to protect oneself from being hurt or because there is a feeling of insecurity. It is like the dog that barks at anything unknown or threatening in the dark. Much as we may have something in common with animals, it is expected of us as intelligent beings to live more above the level of our instincts and to avoid reacting instinctively-- Most Rev. Charles Gabriel Palmer-Buckle.

At one of the seminars on democratic consolidation organised by the Institute of Economic Affairs last year, the Metropolitan Archbishop of the Accra Diocese of the Catholic Church, Most Rev. Charles Gabriel Palmer-Buckle, noted among other things that “good governance blossoms naturally only from the cross-fertilisation of rich ideas and different opinions”.

Last Thursday, I offered my candid assessment of national development and was careful about the choice of words since one could do so rationally and without resort to vulgarity or abusive language.

Unfortunately, those who think that they have better viewpoints and divine authority to suggest to others how to measure success descended on me in an overkill.

They included Mr Chris Ackumey, who served as a teaching assistant in Taxation whilst I was a student of the Ghana School of Law and Mr Samuel Okudzeto Ablakwa, a Deputy Minister of Information.

Indeed, I had countless calls asking what I had done to deserve the scathing remarks on Radio Gold that morning, while others called to ask me to tune in to OK FM.

Things were carried further, when a faceless Afrakoma Fofie of Ashtown, Kumasi, took me to the cleaners in the Daily Graphic issue of Tuesday, January 3, 2012.

It appears as if all that the critics who are loyalists of the National Democratic Congress are saying is that, the issues I raised do not matter, as the capacity in which I offered them.

But, assuming that I am even the flagbearer of a political party, does that rob me of my inalienable right to comment on national issues, criticise the government or offer suggestions?

More so, when as a journalist and media practitioner, the 1992 Constitution specifically enjoins me to hold the government accountable to the people and to uphold the provisions of the constitution.

People who get involved in government are naturally exposed to new information, experiences and knowledge, but that does not mean that they are wiser or more intelligent than other citizens.

Those who read what I wrote could judge whether I was unprofessional or that my abusers do not like the criticism which is a fact.

What they should have done was to tell Ghanaians what the government has done about the Kumasi-Accra road, with or without resources.

Equally, I am no deviant as to be a bad example for journalists. They must learn to tolerate criticism; no matter how harsh since we are not bound to think alike.

As to which is my government or otherwise, I do not care a hoot as to which party or candidate leads Ghana, provided that the government is able to guarantee fundamental freedoms, assure the safety and security of all citizens and ensure sustained economic growth that improves the living standards of the people and meets all the indices for measuring good governance.

If President Mills wins in a free, open, peaceful and orderly election in December 2012, I will have no problem, but the reality is that whatever government he would form thereafter would be different from the current one, hence the constitutional requirement for another swearing in.

As to whether I am ignorant of process and procedure as to the establishment of the two universities, the question is since government knew that parliamentary approval was a precondition, why was the sod cut to symbolise commencement of work?

Again, if the Millennium Challenge Account does not mean much, why should Afrakoma Fofie mention the Motorway Extension as an achievement by Prof. Mills?

As to delegation of authority, President Mills deserves to be commended. However, that does not mean abandonment of responsibility.

Article 58 (4) states this forcefully, that “except as otherwise provided in this Constitution, or by a law not inconsistent with this Constitution, all executive acts of government shall be expressed to be taken in the name of the President”.

But more critical, the President is enjoined “to exercise executive authority in accordance with the provisions of this Constitution”.

As to the concealed threats as was canvassed on Radio Gold about government wanting to do something so that journalists cannot take them for granted, our elders say “mawe dawuro na abaa”, this country has gone through turbulent periods and if even under military dictatorship I was able to criticise government, I will never shy away because of some empty threats.

As to the thinking that only those who support government have the right to speak, when it comes to the national interest, I leave readers with two anecdotes.

The first runs thus; there was this woman who had three sons, one of whom was an idiot. One day when a dwarf came to take the mother away, the two normal, intelligent children could do nothing and they would also not want their idiotic brother to be involved.

However, when the idiot appeared and asked the dwarf to carry their mother away but never to leave a footprint, the dwarf gave up and that saved the mother.

In the second example told by the Okuapemhene, Oseadeeyo Addo Dankwa, there was an air crash in Hong Kong during which some British and Chinese lost their lives. At the first anniversary, relatives of both groups came to pay homage. While the British carried flowers, the Chinese carried food.

The British, feeling superior, turned to the Chinese and enquired when their relatives would come to eat the food. The Chinese had the patience and responded that “when your relatives come to smell your flowers, mine will come to eat”. If dead men do not eat food, they equally do not smell flowers.

By all means we have to disagree over issues, but when that happens, it does not mean that all those who hold one viewpoint or another are more intelligent or stupid than their other counterparts.

The simple lesson is the story of the half glass of water, which the optimists prescribe as half full while the pessimists see as half empty.

If the construction of the Kumasi road meets the measure of development and it has not been done, then those who say so are no fools; nor are those who think otherwise wiser or more intelligent.

We must learn to engage in national discourse without the resort to begging the question or resort to abuse.

I am in a period of mourning following the sudden death of my father on Christmas Day and as we wait for the funeral rites on February 25, 2012, I plead that those who would want to attack my personality would take into account Ghanaian custom.

Let us all pray for peaceful and free elections this year, beginning with valid voters register.

It is imperative to draw the attention of my critics to the fact as stated by Lord Mansfield, in the case of Rex V Wilkes that “The constitution does not allow reasons of state to influence our judgements, God forbid it should.

We must not regard political consequences; however, formidable so ever they might be; if rebellion was the certain consequence, we are bound to say let the cause of justice run unfettered”.

Again, as the Times of London wrote in 1852, in an editorial, “The duty of the journalist is the same as that of the historian – to seek out truth, above all things, and to present to his readers not such things as statecraft would wish them to know but the truth as near as he can attain......To require then the journalist and the statesman to conform to the same rules is to mix things essentially different, and is as unsound in theory as unheard of in practice”.

Before the editorial, a columnist of the paper, Robert Lowe, writing to rebutt a suggestion by the Prime Minister, Lord Derby that the press should work together with the government in the national interest, noted that “the purposes and duties of the two powers are constantly separate, generally independent, sometimes diametrically opposite.

The dignity and the freedom of the press are trammelled from the moment it accepts an ancillary position.

To perform its duties with entire independence and consequently with the utmost public advantage, the press can enter into no close or binding alliances with the statesman of the day, nor can it surrender its permanent interests to the convenience of the ephemeral power of any government”.

Comments ( ): Have Your Say