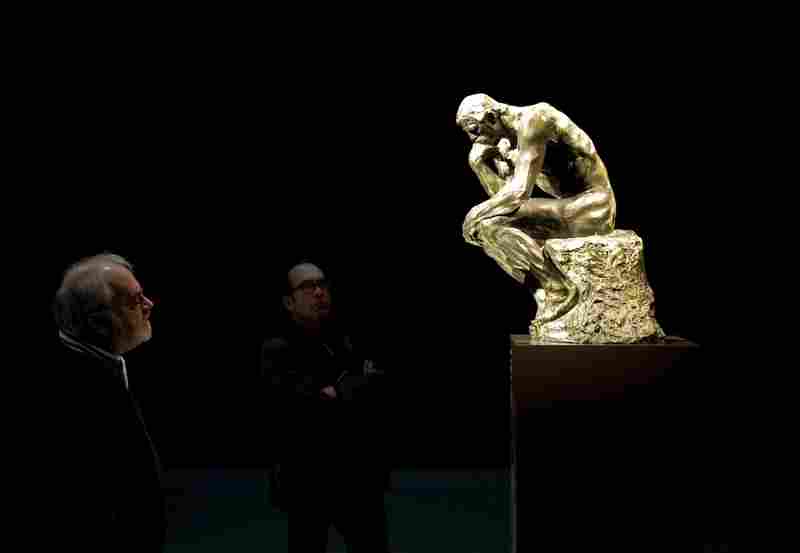 Visitors look at the restored statue The Thinker by Auguste Rodin at the Singer Laren museum in 2011.

Visitors look at the restored statue The Thinker by Auguste Rodin at the Singer Laren museum in 2011.

When I was a kid, I used to lie in bed at night listening to Mets games on the transistor radio, or to the top 40. Sunday evenings were hard because there was no baseball and most of the music stations went to talk.

As I got older, I came to take comfort in the talk. I learned to love Father Bill Ayers' call-in show late on New York's WPLJ.

I thought about my impulse to turn to noise and distraction at an early age when I heard about a paper, published last summer in Science, touting the finding that people would prefer electric shocks to being left alone with their own thoughts. Psychology papers that get a lot of press tend to be the ones that tell us what we already know, or at least what we think we know. And this was no exception. The finding — "that the untutored mind does not like to be left alone with itself" — had the ring of truth about it. And, moreover, I think a lot of us these days are worried not just about all the noise, but about our nearly irresistible impulse to seek it out. Texting, email, social media — we use these to self-stimulate throughout the day and, for some of us at least, throughout the night as well.

So there's got to be something deeply right in the finding that, in the words of the paper, "most people do not enjoy 'just thinking' and clearly prefer having something else to do."

Deeply right, maybe, but there is good reason to doubt some of the findings of the study. Not the data, so much, as the way it gets interpreted.

Take, for example, the most widely discussed result: that some significant percentage of subjects administered a minor non-painful shock to themselves — like familiar household static electricity — when they might otherwise have spent six to 15 minutes quietly in the presence of their own thoughts alone. Notice, to begin with, that the subjects were wearing a self-shocking apparatus. Under those conditions, it strikes me that exploring the effects of shocking oneself, testing and reflecting on one's responses, simply indulging in curiosity about it, should be counted as a form of engagement with one's thoughts rather than a flight from them.

Probing the shocks a few times is not comparable to checking one's email messages. It's more like noticing one's physical sensations as one sits still in a chair, or remarking on the way the light passing through the gauze window-curtain illuminates the carpet in a pattern. These can be modes of concentration rather than modes of distraction.

There's no doubt that subjects took some kind of pleasure in shocking themselves; even if it is also true that they didn't find the shocks pleasant in themselves. But none of this shows that they found just thinking in any sense aversive. And there's good reason to doubt this. When asked, most subjects report finding the experience of thinking at least somewhat enjoyable.
A number of critics have made points like these. University of Vancouver's Kieran Fox et al., for example, writing early this month in Frontiers in Psychology, comment on experiments described in the paper in which subjects chose to engage in externally oriented activities such as reading and playing video games instead of just thinking; the study's authors, University of Virginia's Timothy Wilson and colleagues, characterized this as choosing "mundane activity" over just thinking. As Fox et al. notice, such behavior doesn't show that "just thinking" is unpleasant anymore than the fact that (some) people might choose sex over chocolate would show that chocolate is unpleasant. Wilson et al. reply here. For another critical exchange, click here.

I also would question what we can learn from still another test described in the article in which subjects were found to have "cheated," to have texted or checked email when they were supposed to be spending six to 15 minutes just thinking. Here the conflict between checking and just thinking is real, but the impulse to check, it strikes me, may not be motivated by pleasure as much as compulsion. People check their messages even when they are watching their favorite TV shows. They may choose distraction despite the fact that doing so manifestly diminishes their pleasure.

For me, a bigger issue raised by this kind of research is whether there isn't a tendency to operate with a caricature of what "just thinking" is. We tend to think of thinking as cerebral and inward looking and we contrast that with a kind of selfless outward orientation to what is going on around us. But this is confused. Is the mathematician working out a problem on paper looking out or in? And what about the visitor to a gallery concentrating on a painting. Isn't this kind of looking (at the painting) or doing (writing on the paper) one of the forms that thinking can take for us?

And something similarly goes for the idea that we can simply range complex human psychological attitudes and choices along a spectrum from aversive to extremely pleasurable. As Fox et al. explain, "just thinking" can be valuable, meaningful and important in ways that are tied to, but not the same as, being simply pleasurable. The same is true, perhaps, of any form of what we call exercise. It can be hard to make yourself do your work out. But that doesn't mean that it isn't highly pleasurable. And even when it is, in some sense, aversive, that doesn't mean that you don't value it highly.

Maybe in choosing music and baseball over quiet as a boy, I wasn't choosing noise and distraction; I was learning to concentrate in new ways and acquiring the capacity for new kinds of pleasure.

Alva Noë is a philosopher at the University of California at Berkeley where he writes and teaches about perception, consciousness and art. You can keep up with more of what Alva is thinking on Facebook and on Twitter: @alvanoe