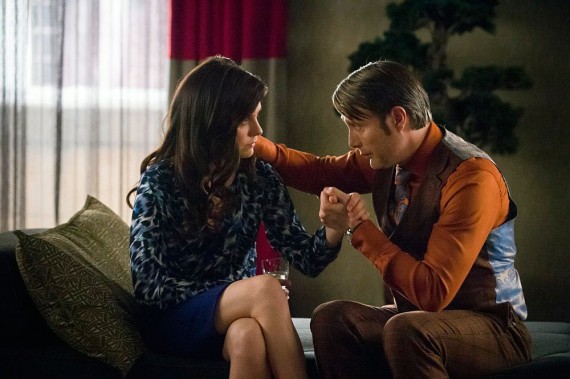 As a psychology professor, FBI consultant and former student of Hannibal Lecter, Alana Bloom helped to profile and incarcerate dangerous criminal, yet she was unable to recognize the monster standing at her side. In fact, perhaps no one was more blindsided than Alana by the revelation of Hannibal’s true nature.

Played by Caroline Dhavernas, Alana refused throughout the second season of the NBC thriller to believe her mentor was a cannibalistic serial killer, and even began a sexual relationship with him. It wasn’t until “Hannibal’s” season finale that she discovered the horrifying truth, when she stumbled upon Hannibal about to murder FBI Agent Jack Crawford. Ultimately, Alana was pushed out a second-story window by the seemingly deceased Abigail Hobbs, whom Hannibal had taken under his wing. Alana survived, but the ordeal changes her forever.

On the Toronto set of “Hannibal,” Dhavernas took a break from filming the third season to discuss Alana’s crushed spirit, Dr. Lecter’s looming promise, making a deal with the devil, and her relationship with Will Graham. She also spoke about Hannibal versus Mason Verger (played this season by Joe Anderson), and which is the lesser of two evils.

At the end of Season 2, Alana was thrown from a window. Did you ever ask yourself how the writers were going to resolve that situation? 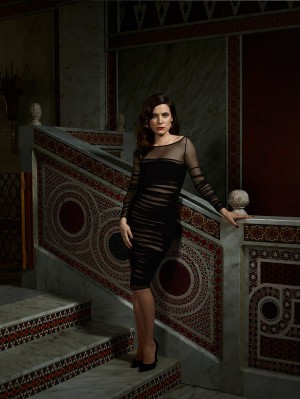 Dhavernas said her character, and the show, are in a very different place as the new season begins

Caroline Dhavernas: Yeah, Bryan Fuller put himself in a situation and created the biggest challenge, but I think it was very smart because usually, for me anyway, when I watch a series, Season 3 and 4 happen and then you either let go and watch something else, or you carry on. It’s that point, a very dangerous point, where we get used to the characters. It can get a little boring and then Bryan very cleverly found a way to escape that and make it a new show with Season 3. We’re all starting on a different level. We have different lives. We’ve all been completely changed by what happened. Also, in the beginning, it’s set in Europe. Different city. Different sensitivity. That was very smart of him.

Can you talk about how Alana is a changed woman after surviving her encounter with Hannibal?

Well, last season, the last time we saw her she had fallen out the window and no one knew if she was going to make it. I didn’t know either. So, yeah, she is a changed woman. She’s been broken physically and mentally. Being so close to Hannibal and then realizing who he was, I think that’s a hard lesson that she’s learned and it’s that what feels morally right to her never really seems to work out, to fix problems that way.

She has toughened up because that’s her environment. She’s dealing with crazy people and she has to play games with them in order to not only protect herself, but to protect the people that she loves. I think that is the biggest change.

How would you describe your character’s psychological profile?

Well, I’ve never wanted to analyze her like that. I guess the same way you wouldn’t want to analyze the person that you’re with in a relationship. You can’t be your husband or your wife’s psychiatrist. I don’t want to over-analyze her, but for anyone to be in that world, there is a darkness in you, for sure. Even though she’s healthier than most of these characters on this show, she’s in a saner place, there’s something inside her that has to be broken to want to fix this and make sure that less people are killed.

Yeah, I think she needs to fix people. She said it, too, in Season 1. That’s why she couldn’t be with Will Graham because it was too close to what she does for a living and he was so damaged that she would have wanted to fix him. I think she was closer to Hannibal because that was the grown-up relationship for her.

What does Alana want this season? I don’t think she’s necessarily looking to fix anyone anymore.

Yeah, it took me a while to really understand what she wanted because she was so changed. Because the show is so intricate, and sometimes very mysterious in the ways that we all manipulate each other, I don’t know what she wants exactly anymore. Everyone is trying to get Hannibal for different reasons.

I think her reason is partly to look out for Will Graham because she knows that he is going to go after him. He can’t stop himself. They have that relationship. But, she can’t go herself because as you can remember at the end of Season 2, Hannibal made a promise to Alana in that kitchen when she was holding a gun in front of him. He said, “If you stay, I will kill you,” and she stays. 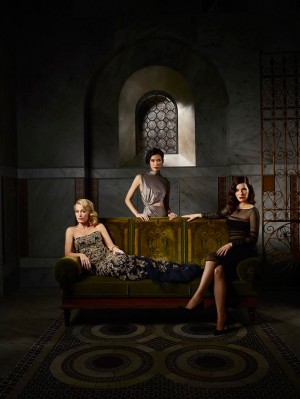 Hannibal manipulated Alana last season, and she will enjoy manipulating another psychopath, Mason Verger, this season

So, there was a promise made. There’s a pact that is underlined all the way through Season 3. She will, at some point later in in Season 3, have a huge responsibility. In “Red Dragon,” you know where Hannibal is, right? She will have a big responsibility into making sure he behaves and stays put.

I think Mason is dumber than Hannibal, so she knows she can play with him. He’s a very dangerous tool. Something inside me believes that Alana is not afraid of dying anymore because of what happened to her. She’s ready to go far and risk her own life.

Mason is maybe more easily manipulated, seduced. His crazy is not the same type of crazy as Hannibal. Yeah, she can use him as a tool to get what she wants. I think the fact that he’s a man in a wheelchair with no face, he’s probably not getting a lot of woman around him, so she can have her own way.

Where does Alana see Will Graham now that she knows everything that’s gone on and the horror that happened?

I think from afar she will always want to look out for him, but she knows now not to get personally involved in cases or open up too much. I think she’s built an armor, and someone was just asking me this morning, if there is love left between them.

I think they like each other, but they’ve clearly had to move on because they were so broken and with everything that happened to them. I think that’s where they are.

What’s your take on our fascination with the “Hannibal” universe?

I think it’s the human monster and the fact that he’s amongst us. He’s a dandy. He’s very proper. It’s about taste. It’s about having bad taste and therefore they [people] deserve to die. It’s very classy and chic, yet horrific. I think it’s that clash between the two. Yeah, it’s the most horrific thing we can ever imagine, eating each other. It goes back to the fascination we have for horror in general. It’s a part of us that we could never allow to come out in everyday life, so it’s very cathartic in a way. Hannibal embodies all of that.

What are your thoughts about the devoted viewers called Fannibals?

They are awesome. I mean, we’re getting hats with antlers knit for puppets and dolls. I’ve never experienced that. I’ve never been on a show that had such a cult following and where fans were so adamant about showing their passion and their love for the show through artwork. It’s been really amazing that way. I’m not on Twitter or Facebook, so when I see this it’s my only way of knowing how people are enjoying it.