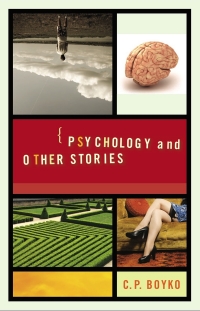 One of the most unfairly slept-on books of 2012, C. P. Boyko’s Psychology and Other Stories (Biblioasis) tackles mental health and the professionals who assess it from six diverse yet tightly controlled angles. These are stories with many moving parts and a range of styles and settings, from tender coming-of-age tales to intra-family corporate takeovers. But they all have psychologists and psychiatrists circling the periphery, and it’s rarely clear whether anyone’s lives are improved by having them around.

The stories are also noteworthy for their length. In a world where fiction tends to get corralled into either short stories or novels, Boyko’s work exists in a lovely middle ground. The pieces in Psychology—none of which, it should be said, are actually called “Psychology”—clock in at an average of 50 pages; “The Blood-Brain Barrier,” a brilliant look at the headaches of being an expert witness in a murder trial, runs for nearly 80. Every subject, from the self-help book industry (“Paddling an Iceberg”) to Sigmund Freud’s experiments with cocaine (“The Inner Life”), is given ample room to stretch its legs.

“To be honest, I just don’t see the hard distinction between stories and novels,” Boyko says, reached by phone at his home in Victoria. “I hear people talk about them as distinct entities, with totally distinct characteristics, and requiring distinct skills. To me, really, the only factor that differentiates them as a group is length. These stories seemed to require a little bit more space, so I gave it to them.”

Boyko grew up in Saskatchewan, and earned degrees in English literature and psychology from the University of Calgary. Psychology neatly combines those two disciplines, and Boyko says the same impulses drew him to both as a student: “a fascination with the way people’s thought processes work, [their] motivations and personalities”.

Yet Boyko’s own motivations and personality prove to be a little harder to pin down. On the phone he’s cautious, even cagey, about basic biographical information; asked why he moved to Calgary, he replies, after a hesitant pause, “I don’t really remember.” He avoids giving interviews to the press as much as possible, and believes everything you need to know about his work is contained on and between its covers. The rest, even when it comes from the author himself, is just speculation.

The design and promotion of Psychology also attempt to sever any connection to its real-life creator. Boyko’s biography on the back is intentionally evasive, and there are no acknowledgments or author’s photograph. There’s barely even an indication that this isn’t Boyko’s first book—his acclaimed debut collection, Blackouts, was released under the name Craig Boyko in 2008.

Here’s the thing, though: I understand where Boyko is coming from. Psychology and Other Stories is a mysterious, rich, and extremely compelling collection. But careful readers will realize it also contains the keys to many of its own locks. The book’s pleasures, in other words, are self-contained. Don’t skip the “Notes on Sources” section at the back—or, for that matter, the entry on “Notes on Sources” in “Notes on Sources”. A blurb on the back cover from one Hubert T. Ross (“Very revealing”) feels out of place until you realize that in the dedication, Boyko refers to Ross as his own psychiatrist.

I had a feeling that Boyko wouldn’t be eager to confirm or deny this man’s existence to me. And I was right.

“Again, I think that if I comment too extensively on them [the hidden references], I deprive other readers of discovering them,” he says. “This underscores part of my reluctance around official interviews. If we were just sitting casually over a beer, I’d love to get into this stuff. And I guess I could, off the record, but that would be kind of silly, because you’ve got a job to do. But, yeah, I don’t really want to give away the secret of those things—or even assuming that there is any secret to be given away. It’s just a question of wanting to leave some ambiguity and uncertainty, which is actually part of why I write fiction, not essays. It’s amenable to ambiguity, and multiple interpretations. If I say what my interpretation is, that already cuts out that possibility for other readers.