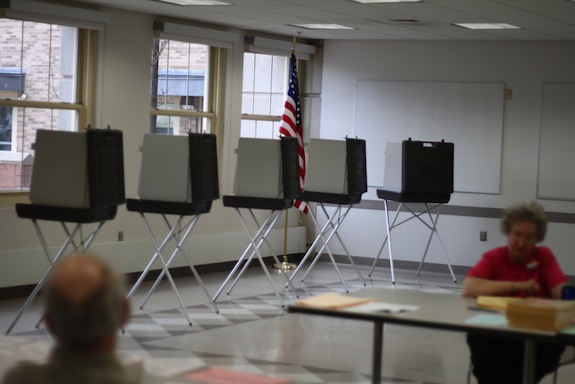 Many irrelevant factors have been found to sway voters at the polls. Image via Flickr user ragesoss

Most of us believe that our political views are based on the issues, or at the very least, on our views of the candidates’ personal qualities, which might matter when it comes to governing. We imagine that we vote for good policies, or politicians that can serve as steady leaders in times of crisis.

But when it comes to voting, as with many other areas of life, we’re not quite as rational as we like to believe. Sure, with high-profile contests like the race for president, most of us have held views for a long period of time, and these are more likely to be based on logic. But research reveals that, especially for local races or ballot propositions about which we’re less informed, a number of weird, utterly irrelevant factors can easily influence our vote.

1. Timing. Whether a policy question is perceived as a long-term issue or an immediate problem can strongly affect a person’s response to it. In a study published in August by researchers from the University of California, Davis, college students were polled on a local bicycle policy and an affirmative action policy, with the initiatives framed as either something that would be put in place in the next month or in the next year. The researchers found that framing both questions as distant, long-term issues led students to think of them in a more abstract way—and be more likely to change their opinions to conform to the beliefs of the group as a whole. In contrast, when the proposals seemed like immediate possibilities, the students’ views were less flexible.

2. Location. Simply being near a church or school might be enough to change your views on social, religious and educational policies. Last January, psychologists from Baylor University conducted street interviews in the Netherlands and the United Kingdom and discovered that people interviewed near churches tended to describe themselves as more socially conservative than people near government buildings—this trend could be seen even when the researchers controlled for religiousness and ensured that the people polled near churches were simply passing, not entering or exiting them. A 2008 Stanford study came to a similar finding, discovering that people who voted in schools were more likely to support an education funding initiative.

Scientists speculate that these findings might both be the effects of contextual priming, in which environmental cues can unconsciously affect decisions and behavior by activating certain associative areas of the brain. The takeaway from these particular studies? Maybe we shouldn’t put our polling stations in churches or schools.

3. Your Home Team’s Performance. As we reported in September, a study by social scientist Michael K. Miller suggests that one especially irrelevant factor can increase an incumbent’s chances of getting elected: a local sports team’s winning percentage. Looking at mayoral races in 39 cities across the United States from 1948 to 2009, Miller found that an incumbent mayor of a city where all home teams made the playoffs had a nine percent better chance of getting reelected than a mayor of a city where none made the playoffs. A 2004 German study came to a similar conclusion, finding that a win by the national soccer team made the party in power more popular, no matter which party it was. Miller attributes this to the “prosperity model” of voting, in which voters simply vote for the status quo when they feel happy for any reason, related to politics or not.

What does this mean for Obama and Romney? Hard to say. Deep into football season, in Ohio, an important swing state, the Ohio State University team is ranked number five in the country and undefeated—but the team is banned from bowl play due to NCAA sanctions resulting from recruiting and other violations. Both of the state’s pro teams have losing records.

4. Candidate Appearance and Attractiveness. In politics, as in business, we give an unfair advantage to the beautiful. A 2008 Northwestern University study found that people were more likely to vote for candidates, both male and female, that they found attractive. This bias was much stronger, however, when male study participants evaluated female candidates. Female participants also cared about the appearance of “approachability” in males, while male participants found the appearance of “competence” the most important factor in male candidates.

5. A Fear of Death. This might be the strangest one of all. A 2005 study that examined the 2004 Presidential Election found that people in a psychologically neutral state of mind were more likely to vote for Senator John Kerry, but when a similar sample of voters was asked to contemplate death and the afterlife, they became more likely to vote for President George W. Bush. The researchers speculated this may have been related to Bush’s “tough on terror” image in the aftermath of the September 11th attacks—and that a tape by Osama bin Laden that surfaced days before the election might have played a role in tipping it for Bush.